We are still open to serve your pets!

What is Coxofemoral Luxation

The coxofemoral joint, or hip, is a ball (femoral head) and socket (acetabulum) joint. A hip or coxofemoral luxation is where the femoral head is displaced from the acetabulum. Hip dislocation occurs most often due to a traumatic event, with vehicular trauma being the most common type. Due to the lateral force that is sustained through the femur, the hind limb is abruptly forced toward the center of the body. This causes disruption of the ligament of the femoral head and joint capsule, resulting in luxation of the hip. In the majority of cases the femoral head is forced up and forward from the acetabulum, termed a cranio-dorsal luxation. The femoral head can also luxate downward under the pelvis, called a ventral luxation. This type of luxation is less common and is usually the result of a slip or fall that caused the dog to go “splay legged”.

Following the injury, the patient is often unable to bear weight on the affected leg. If able to use the injured leg, the gait is typically characterized by external rotation of the knee and inward rotation of the hock (or ankle). The affected limb often appears shorter, and a prominent, hard swelling may be noted above the hip joint, caused by the femur riding high on the pelvis.

What are my treatment options?

Hip luxation must be treated quickly to avoid further damage to the joints and surrounding tissues. There are two treatment categories termed “closed reduction” and “open reduction.” For closed reduction, the patient is placed under general anesthesia and a series of traction maneuvers are employed to replace or “reduce” the ball of the femur back into the socket of the pelvis. Once in place, the limb is put into a non-weight-bearing bandage called an Ehmer sling for 10-14 days.

With closed reduction, stability of the hip is re-established with healing of the joint capsule, scar tissue, and surrounding musculature. Closed reduction is successful in approximately 50% of first attempts. It is most effective if performed within the first 12-24 hours following the traumatic event. Closed reduction is an inappropriate treatment option if bone fragments (avulsion of the ligament, rather than tearing) are present within the joint.

When closed reduction fails, if there are concurrent orthopaedic injuries (pelvic fractures, intra-articular fractures) or if immediate weight bearing is necessary, surgical intervention is warranted. If hip joint conformation is normal, then open reduction with stabilization is recommended. If the hip is severely dysplastic, then a total hip replacement or a femoral head and neck excision (FHO) is most appropriate.

This is a surgical (open reduction) technique that is a form of “toggle rod stabilization”. The technique utilizes an ultra-strong biomaterial to stabilize the hip joint while the supportive structural tissues heal. The biomaterial is an ultra-high molecular weight polyethylene suture material that is used extensively in human surgery for many orthopaedic applications. This material has properties that make it stronger and less prone to failure than any other suture material. 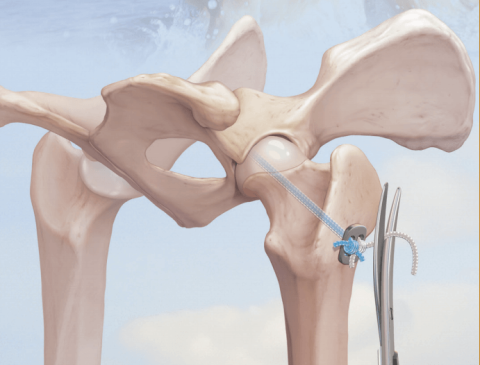 The TightRope Coxofemoral Luxation stabilization is similar in concept to using a molly bolt to anchor a heavy object to a wall. The biomaterial suture is looped through a flat piece of surgical titanium termed the toggle. The toggle is then passed through a hole drilled in the wall of the acetabulum, and then “flipped” up against the wall of the acetabulum. The looped suture strand is then passed through a tunnel created in the femoral neck and secured to the outer aspect of the femur by tying the suture strands over a “button.”

Limb use following surgical repair is often immediate, however, restricted activity is mandatory for 8-12 weeks following surgery to allow for the joint capsule and surrounding musculature to heal. Professional rehabilitation therapy starting at four weeks post-op is strongly encouraged. The patient can return to normal activity once range of motion of the hip joint and muscle mass of the limb return to normal. Re-luxation rate following repair is low with the TightRope system, occurring in less than 5% of cases. This is in comparison to an 11-25% re-luxation rate reported with other methods of repair.

Description of the surgical procedure