What is patellar luxation?

The patella (kneecap) is a 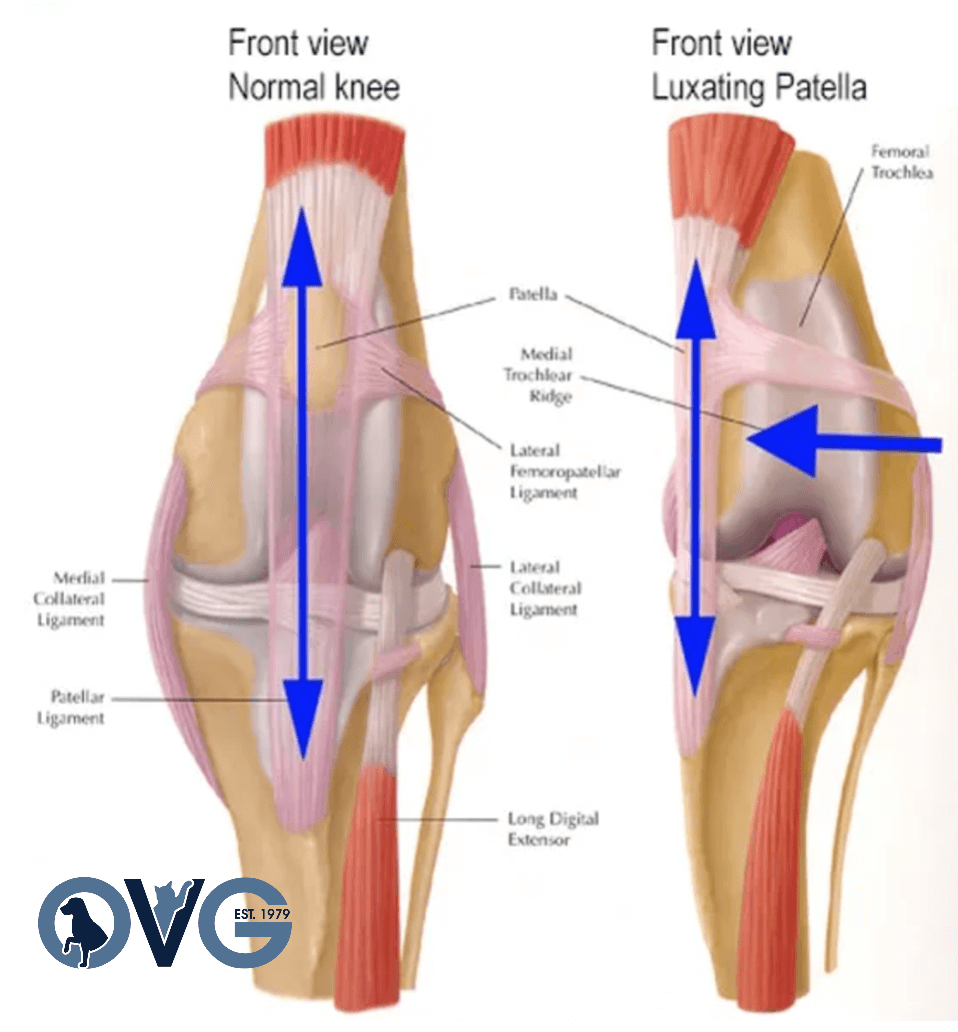 small bone that is positioned immediately above the tendon of insertion of the quadriceps muscle group onto the top of the tibia (shin). The patella acts as a fulcrum during normal extension of the knee joint. It glides up and down within a groove that forms the front of the knee joint. In some dogs, the patella luxates (dislocates) out of this normal groove. The consequence of this luxation is an inability to properly extend the knee joint. As well as the lameness caused by the mechanical deficiency of the affected knee, there are varying degrees of pain and osteoarthritis.

How can I tell if my pet has patellar luxation?

Patellar luxation is a common condition. It affects mostly dogs (although cats can also be affected) and is more common in smaller dogs (although dogs of all sizes can be affected). The age at onset of clinical signs is variable. Most animals start to show signs as puppies or young adults, although the onset of signs in mature dogs is also common. Animals with a “bow-legged” stance are more likely to be affected by patellar luxation. A characteristic “skipping” lameness is often seen, where animals will limp for a few steps and then quickly return to normal. Some animals will limp continuously and some dogs affected by patellar luxation in both knees will have a stiff, awkward gait with knees that do not extend properly.

What is the cause of patellar luxation?

The condition is primarily of genetic cause and is the consequence of the selective breeding of dogs with a preferred (bow-legged) conformation. Animals are born with normal knees, but begin to develop abnormalities of the bones and muscles of the hind limbs early in life. The commonest direction of inappropriate movement of the patella is to the medial (inside) aspect of the knee joint. When the powerful quadriceps mechanism starts to displace in this direction, it acts as a bowstring and causes the bones of the thigh femur, and shin (tibia) to deform into a pronounced outwards bow. The groove that normally houses the patella does not develop properly, and the limb deformities become self-perpetuating at this stage (see photograph above).

What is happening inside an affected joint?

As the patella moves in and out of the groove, it can wear holes in the cartilage of the patella itself and in the ridge that it rides over when it luxates. This causes pain and triggers a cascade of progressive osteoarthritis. Also, the abnormal pull of the quadriceps causes internal rotation of the tibia relative to the femur that can stress other structures within the knee, including the cranial cruciate ligament (CCL). The longer the patella spends outside its normal groove, the shallower the groove becomes.

How is patellar luxation diagnosed?

Patellar luxation is typically diagnosed following a multimodal evaluation process between you, your primary care vet, and a specialist orthopedic surgeon.

Patellar luxation is usually picked up during physical examination by your primary care vet during a routine health check, or when you have highlighted an abnormal gait or ‘skipping’ during exercise. Normally upon finding a luxating patella your primary care vet will refer your dog for assessment by a specialist orthopedic surgeon.

During your initial consultation at OVG, your dog will be examined by Dr. Trathan. Following this, your dog will be admitted to the hospital to allow radiographs of the affected stifle joints under sedation or general anesthesia. Your dog will receive one-to-one nursing care throughout the process by one of our technicians who are all highly trained and experienced in anesthesia and sedation. Following diagnostic imaging, your dog may require surgery to allow corrective surgery to be performed on the affected joint.

What is the grading system for patellar luxation?

The grading system for patellar luxation is based on how mobile the knee cap is relative to the groove at the base of the femur.

How is patellar luxation treated?

Occasionally, patellar luxation is diagnosed incidentally during a routine physical examination. In adult dogs with this incidental finding, non-surgical treatment may be the best option. In immature animals, surgical management may be more appropriate in order to try to prevent the development of severe limb deformities.

Surgery is strongly advised for grade 3 and 4 patellar luxation. For grade 2 medial patellar, luxation only dogs exhibiting significant clinical signs – i.e. a lameness, are recommended for surgical management. Surgery is never advised for a grade 1.

Could delaying treatment do more damage?

Patellar luxation when severe can cause skeletal abnormalities such as bowing of the femur or tibia. In milder cases, we often see cartilage loss from the underside of the patella and/or the surface of the grove as the cartilage is physically abraded from the patella slipping out of the groove. Patients with medial patella luxation are also more prone to developing cranial cruciate ligament disease. As with most things, if the condition is causing a clinical problem then the earlier it is addressed the better it is for the patient in both the short and the longer term.

The cornerstones of non-surgical treatment are bodyweight management, physiotherapy, exercise modification, and medication (anti-inflammatory painkillers). These same techniques are also important in the short-term management of dogs who are treated surgically, although the primary surgical aim is to minimize the requirement for long-term exercise restriction and medication.

Surgical treatments are recommended for dogs with intermittent or permanent lameness as a result of the patellar luxation. There are many surgical techniques; the primary aim is to restore normal alignment of the quadriceps muscle relative to the entire limb. This requires reshaping of the bones and reconstruction of soft tissues.

The most important component of the repair is to realign the insertion of the tendon spanning between the patella (kneecap) and tibia (shin bone). Because bones heal much more efficiently than tendons, the bone that this tendon is attached to is cut and moved to a more appropriate position. It is pinned back into place and the bone heals gradually over the following 4-8 weeks. Often wire is placed in addition to the pins so that the pull of the quadriceps muscle is effectively balanced by wire anchored to the tibia in the opposite direction.

In some dogs with a severe bow in the femur (thigh bone), straightening of the femur is performed. This is achieved by taking out a wedge of bone (sometimes in three dimensions) and repairing the femur using a plate and screws. Femoral varus osteotomy is most commonly performed on larger dogs and dogs with higher grades of patellar luxation. CT scans are particularly important when planning such corrections and new bone-cut configurations may help a three-dimensional reorientation. One such cut is a dome osteotomy as pictured here, which allows re-angulation of the bone segments in any direction.

When the groove that the patella normally glides in is very shallow, surgery is performed to deepen the groove. This involves the removal of a wedge or block of cartilage and bone, which is replaced in a recessed position. Sometimes, when deeper seating is required, a block-shaped deepening of the groove may be superior to a wedge. 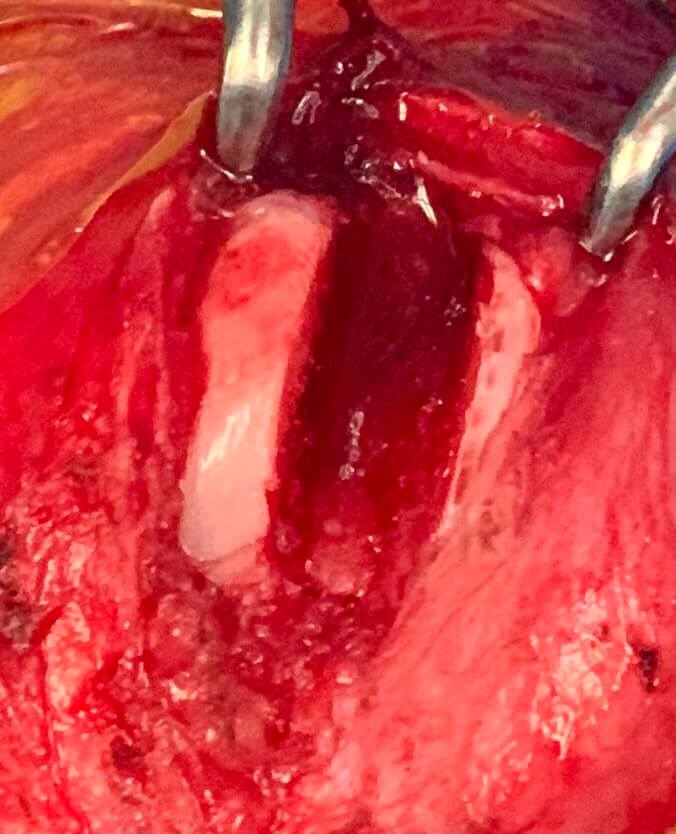 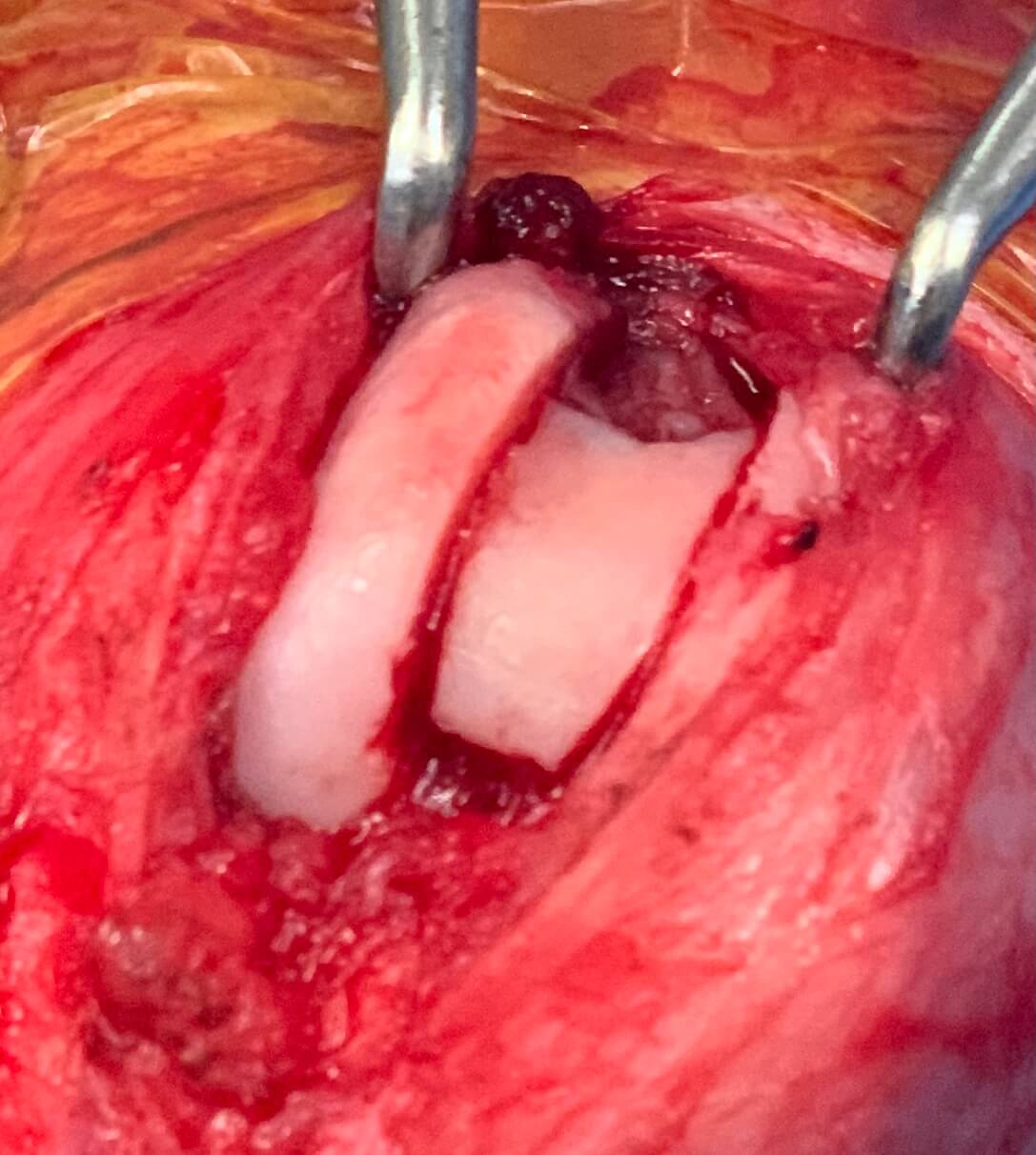 In most dogs affected by patellar luxation, the soft tissues on either side of the patella are either too tight or too loose. Reconstructions are usually performed to release tight tissues and tighten loose tissues.

Will my dog be able to exercise normally after patellar luxation surgery?

Your dog will initially have to undergo a standard period of 6-week rest, usually involving cage restriction at home, combined with a limited lead exercise program prescribed by Dr. Trathan.

Following a 6-week post-op reassessment and providing your dog is making good progress there is no reason why he/she cannot enjoy the same exercise as before surgery.